Playground Project – Bank of the Sierra completed its 40th Anniversary playground project late in January 2018 with a special kid-friendly Grand Reveal event, packed with face painting, balloon twisting, raffles, giveaways, and a toast with milk and cookies. Rosa Brothers Milk Company generously donated the milk for the event. Porterville is where the Bank started 40 years ago, so it was only natural to donate the play structure to the members of the community who helped get Bank of the Sierra to where it is today. This playground is the most unique in the county! The structure itself is three stories high and features a custom forest theme, four slides, and the capacity to hold 167 children! The playground is located at the Porterville Sports Complex at 2701 W Scranton Ave, Porterville, CA 93257.

(music)
View of forest-themed playground.
Views of children at grand opening/ribbon cutting event.
View of milk and cookie toast at event opening.
View of sign: Bank of the Sierra is delighted to donate this playground to the city of Porterville. A special project celebrating our 40th anniversary.
Ribbon cutting.
Children play on playground. Children get face painting.
View of refreshments table, cookies. Prizes.
View of the playground sign, The Forest.
Children play and wave.
Logo: Bank of the Sierra, Keep Climbing.

Lompoc Branch – Bank of the Sierra has completed its acquisition of the Lompoc branch of Community Bank of Santa Maria. With the purchase of this location, the bank increased its number of branches throughout Central and Southern California to 39. Read the press release here.

Ojai Community Bank—Bank of the Sierra is excited to announce the completion of the Ojai Community Bank acquisition. With the close of this acquisition, Bank of the Sierra welcomes customers and employees from our four new branches in Ojai, Santa Barbara, Santa Paula, and Ventura, bringing the bank’s total number of full-service branches up to 39. Read the press release here.

Fresno North Palm Avenue Branch — On September 10, 2018, Bank of the Sierra opened its 40th branch and seventh location in Fresno County. The new branch features ample parking, ATM access and more, all at a convenient location for our Fresno customers. Read the press release here.

Pismo Beach Branch — Bank of the Sierra is excited to announce that its full-service branch in Pismo Beach, CA is now open. This is the bank’s fifth addition to San Luis Obispo County’s footprint. Click here to read the official press release.

Bakersfield California Avenue Branch — On March 20, 2017, Bank of the Sierra was pleased to open its 4th location in Bakersfield, and 34th location overall. 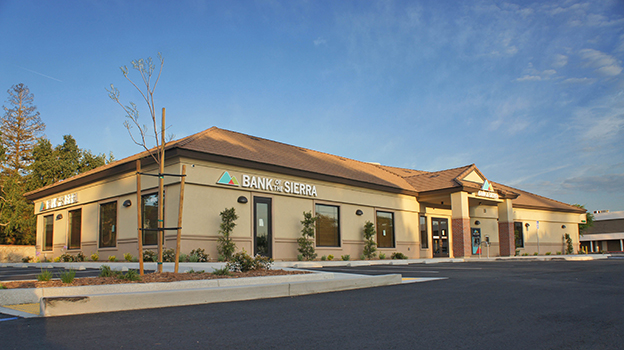